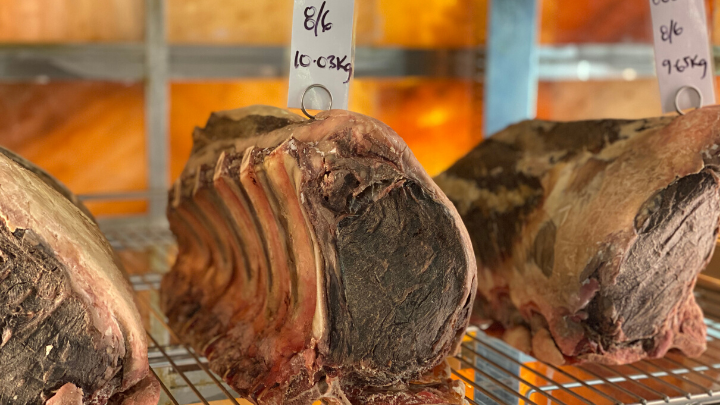 It’s luxurious, it can be costly and for some first-timers, the taste can take some getting used to. But for hobby cooks, meat lovers and grill aficionados, dry aged beef is one of the ultimate steak experiences. But what’s so good about dry aged beef?

Read on to learn what dry aging is, how it works, the benefits of eating dry aged beef and how to enjoy the ultimate high-end steakhouse experience at home.

What’s the deal with dry aging?

When you walk into Peter Augustus’s butchery in New Farm, a craft butcher in Brisbane, Australia, you’ll see an impressive dry aging cabinet that looks like it belongs in a science lab. “This is the original dry aging process, how steaks were stored,” says head butcher Aaron.

In fact, dry aging is a process that goes back thousands of years. Before the invention of refrigeration, dry aging (whether it was in a chamber, a cellar or a cave) was one of the only methods of keeping meat fresh, other than smoking, brining or pickling. It is a time honoured technique that both enhances the flavour and tenderness of meat.

In essence, dry aging is when you take a piece of meat and put it into a controlled open-air environment to go through a flavour transformation. By exposing the meat to air, moisture is pulled out and the natural enzymes in the beef break the muscles down slowly over time, making it more tender. When the surface of the beef dries, it creates a crust over the muscle, but what’s inside stays moist and red.

The meat is also subjected to other environmental impacts during the aging process — various molds and yeasts that land on it — all of which play a role in the final flavour profile of the beef. The longer you age it, the stronger it gets. (Think of it like science for meat lovers.)

“We normally dry age our meat for 40 to 50 days. Two months is the maximum we’ll go”, says Aaron. “After that the flavour can become much too intense.”

How does dry aging work?

The truth is, all meat benefits from some amount of aging. Most of the beef we consume has been wet aged — a process where the meat has been sealed in a bag to retain its moisture. The chemical transformation that happens to beef occurs regardless of whether the meat is left outside of a bag to dry age or inside a vacuum-sealed bag to wet age. The difference comes in the flavour.

1. Moisture is pulled out of the meat. The fat portion retains more water than the lean portion, causing the lean muscle to shrink around the fat; the fat becomes more pronounced, thus giving the beef more flavour.

2. Bacteria formed in the aging process produces a robust flavour profile that is highly desirable. “It’s like cheese,” says Aaron. “It’s very rich and intense.” In fact, if you look at a rib of dry aged beef, you can see veins similar to those found in blue cheese working their way through. Both the mold, and the flavour profiles, are indeed similar.

How does dry aged beef not spoil?

The key to dry aging is consistency — controlling the decomposition so that the meat ages, not rots. It all comes down to three key factors: air flow to help form a crust, humidity control to slow down the migration of moisture and keep natural juices from running out, and temperature control to stop the meat from spoiling.

The meat is also protected by the bones and fat which is why, if you’re dry aging at home, it’s important to choose high quality large cuts with the bones still in. (Think of it like a bone shield.) Once the aging process is completed, the dried-out layers around the exterior are cut away, leaving you with a beautifully aged, edible dark-red piece of meat.

Is dry aged beef really better than the alternatives?

Those who enjoy meat are really starting to better understand the benefits of dry aged beef. When you first open up a packet of dry aged beef, you’ll probably notice a distinctively intense, rich smell. Once cooked, the molecules inside the beef begin to wake up with heat and that smell wafts up to our noses and senses. This is where dry aging takes a step beyond cooking just a regular steak.

Clint, head butcher at Peter Augustus’ Camp Hill location, says it’s all about the texture. “Aged meat is super tender, fantastically tender. The meat is softer, making it easier to cut through, and easier to digest.”

And the taste? “It’s hard to describe.” says Aaron. “It has a richer, nuttier, beefier flavour. It’s almost cheese-like.”

How to cook dry aged beef at home

To cook a dry aged steak at home, prepare it just like you would a regular steak, but with one difference: “With dry aged beef, you do run the risk of over-seasoning so don’t go as heavy on the salt as you would a normal steak,” says Aaron.

Once you start searing, don’t walk away from the pan. Dry aged steaks will cook faster because there is less moisture. Aaron adds: “I wouldn’t cook it any more than a medium.”

“Don’t overthink it,”advises Clint. “Let your steak get to room temperature for at least 30 minutes. Bit of oil, salt and pepper. There you go.”

A true labour of love

Dry aged beef may come with a bigger price tag, but the payoff is a flavour that is unmistakable and a texture that is vastly superior to wet aged beef. The benefits far outweigh the costs.
Ultimately, dry aging is for those who are looking for a next level eating experience and that’s what it can really bring to the table.

If you love steak but have never tried one that’s been dry aged, this dry aged rump cap recipe might just inspire you.

What cut of beef is a cube roll?

20 of the best steakhouses in Queensland