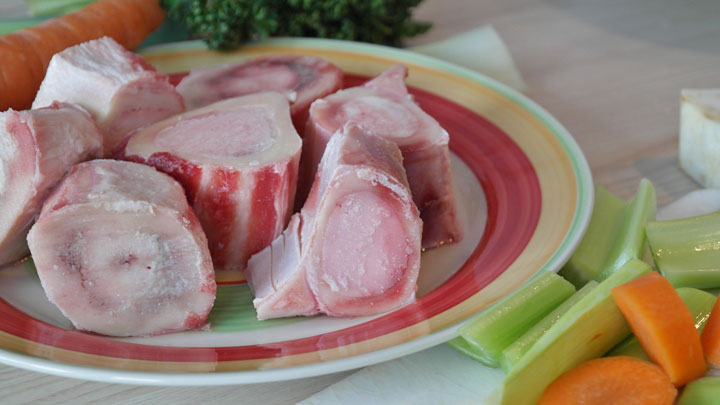 Everything you need to know about beef bone broth

Bone broth is made by boiling the roasted bones and connective tissue over a long period of time. This method draws the gelatin and minerals out of the bones and into the broth leaving you with a rich, flavoured liquid. Once the liquid is strained, the solid part is discarded and the remaining broth is seasoned and ready to be used.

As a highly versatile dish, it can be sipped on plain, or used as a base for many other meals including soups, casseroles, stews, stuffing, marinade and risotto. It can also be used instead of water when cooking grains such as quinoa for added flavour.

Bone broth can be made out of a range of animals, however beef bone broth is usually what comes to mind when you think of broth.

Difference between bone broth and stock?

While bone broth and stock can be confused and are similar, they do differ. The main point of difference between the two is the cook time. Bone broth is cooked for 24 hours or more, whereas stock is ready in as little as three hours. Additionally, bone broth can be used as a substitute for stock in your recipes to add a deeper and richer flavour to your meals.

Once cooked, bone broth needs to be cooled and placed in the refrigerator where it can last for three to four days. Alternatively, it can be stored in the freezer for longevity. If you choose to store your bone broth in the freezer, we recommend pouring it into an ice cube tray and freezing in individual portions. This way the next time you feel like some bone broth, or your recipe calls for it you’ll have single servings ready to go.

Blanch the bones – place the bones into a large pot, cover with cold water, bring to the boil over high heat and simmer for 20 minutes before draining and rinsing the bones in water.

Roast the bones – place the blanched bones and vegetables into a roasting pan and place into the oven at 230 degrees celsius. Roast for 30 minutes, toss and continue roasting for another 15-30 minutes. The key is to make sure they have enough space, you don’t want to pile them on top of each other. Don’t worry about over roasting, you want the bones to be brown and caramelised.

Boil the bones – scrape the ingredients from the roasting pan back into the large cleaned pot, cover with water and add bay leaves, peppercorns and vinegar. Cover with a lid and bring to a low boil.

Simmer the bones – once the low boil has been reached, reduce to a low heat and simmer with the lid slightly ajar. You may want to occasionally skim the excess fat or foam from the top and top up with water if needed. Leave to cook for 24 hours or more, keeping in mind that you can’t overcook broth, but watch for evaporation.

Cool down – cool down the broth by putting some ice into the strained liquid and transferring it to a wide shallow container. Once cooled you can then refrigerate.

What beef to use for stew

How to cook beef cheeks