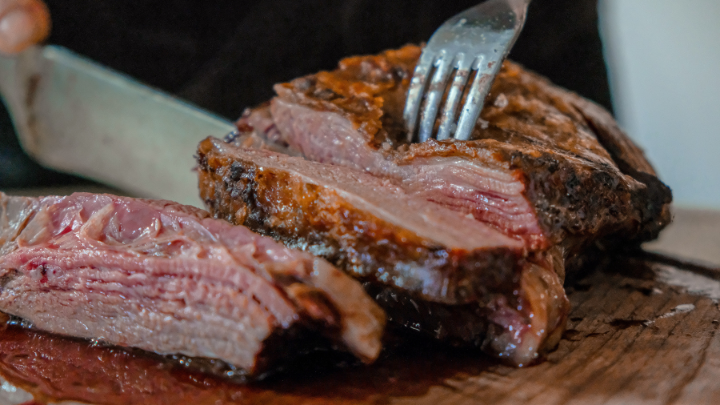 How to smoke a brisket: Tips from a barbecue grand champion

It has been known to “make grown men cry”, but don’t let that put you off cooking a brisket. If you are kinda new to the barbecue game, you’ll want to first hear what Chef Adrian Blomfield of Double Barrel BBQ has to say. Here are his expert tips on how to cook a winning brisket at home.

“Beef is my whole world,” says Adrian. “I love beef in all its forms, from the prime cuts to the secondary cuts, and utilising those in both business and competition.”

Adrian has been a chef for 30 years, but it wasn’t until 2015 when he competed in competition barbecue for the first time.

“Our first team competition was the Australian Barbecue Wars in Port Macquarie. We came 1st in pork and 7th overall out of about 40 competitors. Not bad for a first attempt.”

Adrian says it’s the infinite flavour profiles that he loves most about barbecue.

“Wood and smoke is a seasoning, so the type and variety that you use changes the flavours you can achieve.

There are so many different parameters – charcoal, ironbark etc. This is what makes it all so interesting.”

He adds, “It’s a primal thing too, I suppose. Getting away from work where everything is cooked at an exact temperature and time, to just being a man controlling his fire.”

“This is the standard Texas-style rub and is what many of the big smokehouses like Louie Mueller use. We smoke it low and slow, and season it with smoke.

“We make all of our own injections and sauces from scratch, which we use at competition level. But there are a lot of great rubs out there that you can pick up at your local grocer or butcher.”

Cooking a brisket at home

Adrian’s first tip is to start with the best quality meat you can afford.

“I like wagyu brisket, but it’s not a necessity. If you can get a nice Angus, grain fed with good marbling and a nice and thick fat layer, that’s ideal.”

The next step is to trim out any hard areas of fat.

“Trim the brisket so that it is nice, smooth and even. Don’t take off too much fat, but just get rid of any excess areas. This is important so that air flow can travel over the meat to achieve a nice, even smoke.”

If you have a good local butcher, you can ask them to do this for you.

Next comes the seasoning.

“I keep it nice and simple, and don’t use any injections at home. A good dalmatian rub (salt and pepper) is about where I end up.”

Then get a nice, even cooking temperature.

“Get your fire going. I tend to cook hotter than most – aiming for around 275º–300ºF – just because I don’t want to sit around waiting for 9 or so hours. If you know what you’re doing, you can achieve the same end results cooking it quicker. Otherwise, just get a good, even temperature going and then put your brisket straight on the barbecue rack.”

At this stage you’re essentially cooking the meat to colour.

“Keep the brisket in until you see a bark has formed – you’re looking for a firm, dark crust.”

Once that happens, Adrian says, it’s time to wrap the brisket in foil or butcher’s paper.

“I like to add a little bit of beef stock or butter in the foil. Wrap it up and put it back in the smoker.”

Adrian says not to focus too much on the temperature.

“Many people will try to cook a brisket to a certain temperature, but the problem with that is it varies from piece to piece, from a fast cook to a slow cook. Some briskets will be ready at 195ºF, while others will need 210ºF.”

He says it’s better to cook it to feel.

“Probe your brisket all over with a thermometer or a needle. It should feel like soft butter. That’s what you need.”

Once you’ve got it to that point, remove the brisket from the smoker and do what is called tenting.

“Open the foil and let it cool down by about 10-15 degrees. Then wrap the brisket back up to retain all of the juices and leave it in a cooler or esky with towels to rest.”

Slice away across the grain and you’re ready to serve.

Why does brisket turn out tough?

Adrian says this is generally because it is undercooked.

“Brisket contains collagen, or connective tissue, which needs to reach a temperature where it melts. Once that starts to happen the meat breaks down – but just before that point, it toughens right up.”

He says people tend to think that they’re overcooking brisket, but in fact it’s undercooked.

“A medium rare steak is around 105ºF/40ºC in the middle whereas brisket will be 195ºF/90ºC. This is especially true if you’ve got a poor quality piece of meat without any marbling.”

This leads back to his first point about buying the best quality meat you can afford.

Can you save a tough brisket?

Yes – Adrian says you can fix it, but you’ll need to have some stock or sauce ready.

“If you have undercooked your brisket, refoil it and add a bit more moisture (a bit of beef stock or sauce) and put it in the oven.”

What cut of beef is tri tip and how do you cook it?