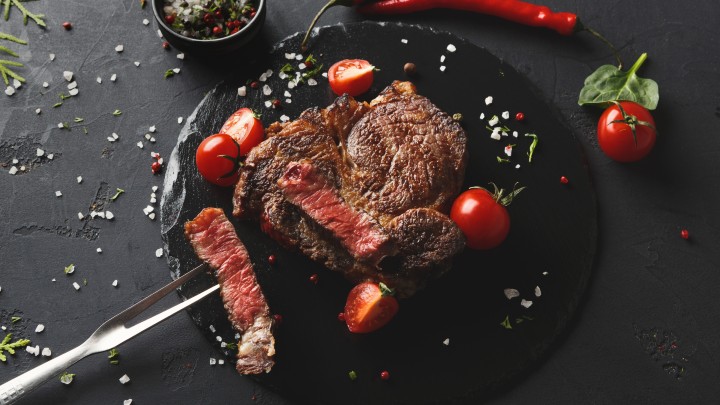 It’s time to stop calling your steak ‘bloody’, because that juice on your plate isn’t what you think it is.

Of course, nobody could blame you for making this mistake – it’s only natural that you would assume the pinkish-red liquid oozing out of the meat in front of you would be blood. If the sight of blood makes you squeamish, this can be off-putting, but the truth is that practically all of the blood is taken out of meat during processing, long before it gets to your plate.

What is the liquid coming out of steak?

Even the rarest and reddest of steaks is actually bloodless. Instead, what you’re looking at is a combination of water, which makes up about 75 per cent of meat, and a protein found in muscle tissue called myoglobin. If that name sounds familiar, it’s probably because it sounds a bit like hemoglobin, the protein that transports oxygen in blood. Yes, there’s that word again, but myoglobin isn’t blood (honest!) – instead, its job is to transport oxygen through muscle.

Myoglobin looks like blood on your plate because, like hemoglobin, the iron in myoglobin turns red when it is exposed to oxygen. That’s why muscle tissue is red. Most mammals have plenty of myoglobin in their tissue, which is why meat that comes from mammals – including beef, lamb and pork – is known as ‘red meat’, and meat that comes from animals with low levels of myoglobin (like most poultry) or no myoglobin at all (like some sea life) is known as ‘white meat’.

Myoglobin can lose its red colour due to chemical changes over time, which is why meat that has been sitting at the supermarket or resting in your refrigerator for a few days will start to turn brown. This doesn’t necessarily mean the meat has gone bad, though, so in these cases, it’s better to use the sniff test than the eye test.

Certain meats, like hot dogs, are misleading in this regard, because they are given a nitric oxide treatment that keeps their pinkish-red colour locked in no matter what.

When it comes time to cook your steak, the myoglobin will darken as it’s exposed to heat and the meat loses its moisture. That’s why a rare steak looks ‘bloody’ and a well-done steak takes on a grey colour.

How do you keep a steak juicy?

Letting your steak stand for about five minutes after you cook it will allow the juices, which are pushed towards the centre of the cut under heat, to be redistributed and reabsorbed throughout the meat. This way, your steak will lose less liquid when you cut it, leaving you with less ‘blood’ on your plate. (This goes for roasts, too, but in that case you should wait 10 to 20 minutes before carving.)

So there you have it – if you’ve been cooking your steaks until they’re well-done and avoiding steaks on the rarer end of the spectrum purely because of the ‘blood’, you’ve been missing out on some deliciously tender and juicy meat for no real reason.

On the other hand, if you’ve been ordering rare steak because of the ‘blood’, it might be time to reconsider your choices…

Read next: The perfect steak preparation

Video: How to pan-fry a medium-rare steak fast

How to make your own biltong at home

What cut of beef is tri tip and how do you cook it?

What are the best cuts of beef for stew?