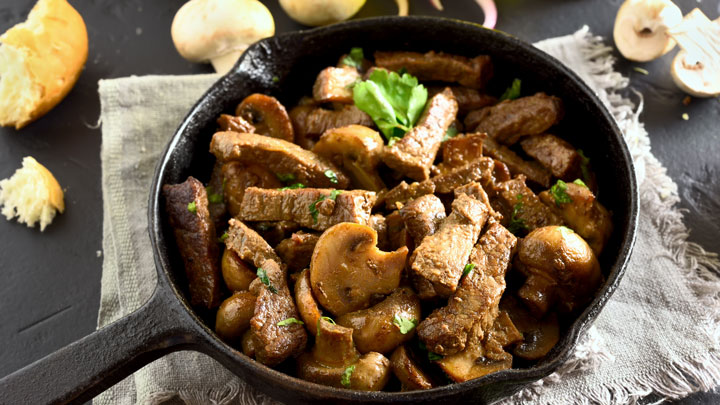 Originating in Russia in the mid-19th century, beef stroganoff has continued to be a family favourite. With its succulent meat and delicious sauce rich to the point of being irresistible, the popularity is justified. When you get the recipe right, you can expect everyone to be licking their plates, shortly followed by a food coma.

This meal is quick to prepare and cook, and is also great for leftovers as it will hold in the fridge for three to four days.

What is the sauce made of?

The sauce is a wonderful combination of sour cream, mustard and beef stock, thickened with cornflour. There are many variations – some with Worcestershire, some with soy sauce – we like to add a bit of tomato paste to give a richer, punchier flavour.

A common issue is knowing what cut of beef is best to create a scrumptious stroganoff. Get it right and you’ll have a delicate dish, but get it wrong and you’ll be biting into chunky, dry cuts of beef.

The best cuts of beef to use for stroganoff are:

As the most tender of steaks, you’ll want to splurge on this one. The boneless ribeye will create a succulent beef stroganoff with the marbling making it flavoursome. The fat content is what keeps this beef mouthwatering and will result in high levels of tenderness.

Sirloin is a great all-rounder cut that is tender and tasty. It’s quite lean though, so keep an eye on it during cooking – overcooking this beef could give your stroganoff a bit more chew.

Performing best when thinly sliced, rump steak is the most tender cut that comes from the hip section of the animal. This option will prove to be one of the most affordable for your stroganoff. Similar to the sirloin, thinly cut strips seared over high heat will be the most effective and tasty way to cook them.

If you’re on a budget you can get away with using a round steak. This cut is the most affordable, but can be chewy and fibrous if not prepared correctly. The round steak is great if you are in a rush and need something to cook, fast. However, if you take this option, we recommend slow cooking as this will turn the meat tender and give your meal a nice taste.

Overall, we recommend high quality beef is best so head to your local butcher for advice and selection of high quality products.

Now that you know all of the important details, it is time to get cooking.

Try out this classic beef stroganoff dish that will prove to be a crowd favourite.

Sear the meat in a hot pan for 30 seconds and put to the side.

Turn the heat down to medium-high, melt the butter and saute the onions and garlic for approximately one minute. Then add in the mushrooms and cook until they are golden brown. Make sure you scrape the pan to get all of the crispy and golden bits off for added flavour.

Sprinkle the cornflower over the mushroom mixture, add the tomato paste and mustard. Stir here and let cook for one minute.

Slowly add the beef stock into the pan, stirring constantly. Bring the mixture to the boil and return the beef to the pan. Add the sour cream and stir until combined. Cook for two minutes or until the beef is warmed.

Season to taste and serve over pasta or rice.

What are the best cuts of steak in the supermarket?