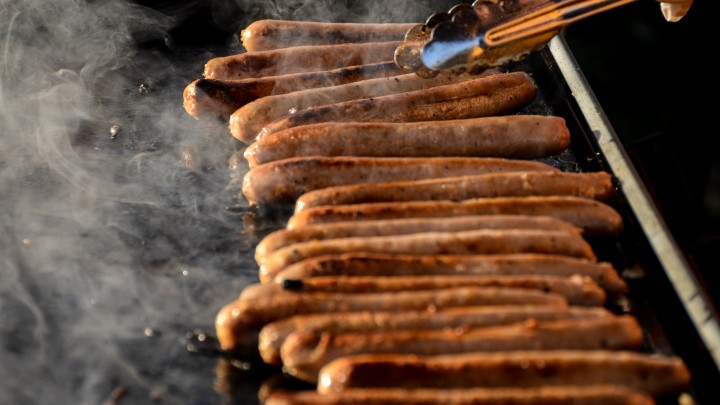 If you’ve got a soft spot for snags, you’ve come to the right place. Here’s everything you need to know about what’s in your beef sausages, as well as the best ways to cook them.

Sausages are a beloved cornerstone of Australian culture. The humble sausage sizzle is a constant presence at school fundraisers and athletics carnivals, and the highlight of any trip to a polling booth or hardware store.

But how much do you really know about those snags you’re sizzling?

What’s in a beef sausage?

You’ve probably heard all sorts of horror stories about the ‘mystery bags’ of meat that make up sausages, especially the cheap supermarket variety, but let’s demystify those rumours.

It’s highly unlikely there are any snouts, brains or tongues in your sausage, not just because those offaly bits are likely to sell for a higher price overseas anyway, but because Aussie legislation requires offal to be identified in the ingredient list.

In reality, the meat in cheap supermarket sausages is usually made up of ‘trimmings’ – off-cuts of premium cuts. There’s nothing wrong with using trimmings, per se, but your tastebuds will notice the difference when you buy sausages from butchers who use primal cuts.

Butchers will usually aim for the perfect combination of lean meats (like brisket) and fatty meats (like chuck) when making a sausage. A 70/30 lean/fat ratio is ideal – this way, there’ll be just enough fat to give the sausage its texture and flavour after it’s been cooked.

You’ll probably pay more when you go to a specialty butcher for your sausages instead of a supermarket, but you’re paying for superior flavour and quality. Australia produces some of the finest beef in the world, including highly marbled, melt-in-your-mouth Wagyu and Angus beef, which can make for tender and delicious beef sausages.

Whether the beef that makes up your sausage comes from cattle that were grass-fed or grain-fed will also affect its texture and flavour.

Grass-fed beef tends to have a more nuanced and complex flavour profile, because variations in seasonal and geographic factors influence what’s being eaten by the cattle.

Grain-fed beef, on the other hand, has a more consistent and buttery flavour, because of the controlled feeding regime the cattle have been raised and fattened on.

Of course, beef is only one part of what makes up a beef sausage. The next element to consider is the sausage skin, which can come in the form of natural casings (made from the lining of sheep, cow or pig intestines) or edible collagen casings (derived from processed cow and pig hides).

Natural casings are thin and translucent, which allows the beef to be the hero. Natural casings tend to have a superior taste and texture to collagen casings, which is why they’re favoured by speciality butchers. Collagen casings, on the other hand, are more likely to be found on the cheap sausages you buy in bulk at the supermarket.

Sausages also contain binding agents to hold the meat and fat together. Common binders, also known as fillers, include breadcrumbs, hydrolysed vegetable protein, wheat flour, rice flour and gluten-free flour. You should avoid sausages that go overboard on binders, because high-quality sausages have a higher percentage of meat – you don’t want to dip below 70 per cent.

Finally, watch out for sausages labelled as ‘beef-flavoured’ – this usually means there is less meat in the sausage than you’d expect to find in a traditional snag.

How to cook beef sausages

One of the reasons sausages have become such an Aussie staple is that they’re not just delicious – they’re also incredibly easy to cook. Here are a few simple methods for browning up the perfect sausage.

There are plenty of ways to cook sausages, but there’s no more iconic method than throwing a snag on the barbie. It doesn’t actually make a difference whether you cook them on the flat plate or the grill – all the steps are the same either way.

First, separate the sausages from each other by cutting their links, but don’t pierce or prick the actual sausages – that’ll let all the moisture and the flavour out, resulting in dry and shrivelled snags.

Cook your sausages over a medium heat, because if they get too hot, they’ll burst. If your barbecue doesn’t have a ‘medium’ setting, just make sure you give yourself enough room to rotate them regularly.

Turn your sausages regularly to ensure they cook evenly. Think of them as little pigs on the spit, if that helps.

Remove your sausages from heat when they’re crisp, firm and cooked all the way through to the centre.

The desired internal temperature is 65.6°C – if you have a meat thermometer, you could pierce one sausage (and only one, because remember, piercing sausages lets the flavour out) to test its temperature. If you don’t have access to a meat thermometer, just cut a piece off the end of one sausage. If it still looks pink and raw, leave your sausages on the grill for a little while longer.

As above, separate the sausages from their links, but don’t pierce them, so you can keep the juices and flavour inside the sausage.

Preheat your pan to medium-low and add a small amount of oil or unsalted butter. Again, it’s important that they don’t get too hot, or the skins will burst.

Add your sausages to the pan and turn them regularly so they cook evenly and don’t burn. You want to cook them right through while getting that perfect shade of brown on the outside.

For thicker sausages, you should drop the heat to low and cook them for at least 30 minutes – this will help you cook them all the way through to the centre without burning the outside.

Again, the ideal internal temperature is 65.6°C – if you’ve got a meat thermometer, you can pierce one sausage with a meat thermometer to test it, but otherwise you can just cut a piece off the end of one sausage to see if it’s cooked through. If not, your sausages need some more time in the pan.

To reduce the cooking time of thicker sausages and ensure they remain moist, you can try poaching them for a little while before you throw them on the grill or in a frying pan.

Just bring a saucepan of water to the boil, and then place the uncooked sausages in the water. Make sure they’re completely submerged in the water, and reduce the heat to a gentle simmer.

Let the sausages simmer for about 10 minutes, then remove them from the water and dry them off with a paper towel.

You can then put them on the grill or in a frying pan to brown them and finish them off.

Here it is; the most efficient way to cook sausages.

For starters, preheat your oven to 180°C.

While that’s heating up, place a sheet of baking paper on an oven tray. Separate the sausages and place them on the baking paper, making sure to leave space around each of the sausages so they can evenly colour.

Place your snags in the oven and roast them for 25 minutes (or until cooked), turning them halfway through.

As above, make sure your sausages are cooked right through to the centre, and enjoy.

While baking sausages is, without question, the easiest way to cook them, you also run the risk of drying them out this way – to ensure you retain their moisture, you’re better off grilling or frying them.

What else can you do with beef sausages?

If you’re not satisfied with simply throwing a snag into a piece of bread and lathering tomato sauce on top, here are a few other uses for these endlessly versatile victuals.

There’s no need for you to wait until the next time you stumble across a sausage sizzle to enjoy a mouth-watering snag – but you can still do that, too. After all, what else are gold coins for?

Video: What’s the best way to reverse sear a steak? Oven VS Barbecue

Why steak lovers flip out over wagyu beef