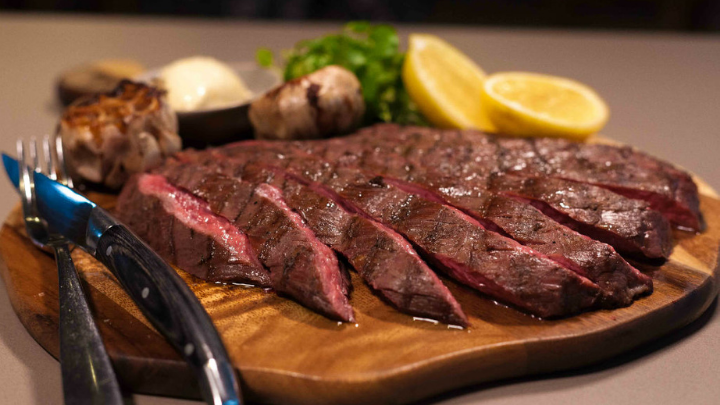 Rib-eye, eye fillet, strip steak…we all know and love these popular cuts, reaching for them time and time again when we want a quality beef experience. But there are plenty of secondary cuts in the beef world, derived from a smaller percentage of the animal, that are just as mouth-watering.

The great part is that many of these lesser-known cuts of beef are inexpensive, versatile and packed with flavour. Some of these cuts have several different names (which can be confusing when you’re at the butcher or grocery store) so we’ve broken them down for you below.

Let’s take a look at these less pricey but just as tasty cuts of beef.

Read next: Where every cut of beef comes from [infographic]

Hanger steak gets its name from its location on the cow, hanging from the lower belly between the loin and the rib. As there is only one hanger per animal, it has long been nicknamed ‘butcher’s steak’ as it was said that the butcher would secretly keep this cut for themselves.

When butchered, the hanger isn’t a pretty sight as it comes wrapped in tough gristle and silver skin, but most butcher’s will sell it trimmed and ready to go (unless of course, they’re trying to keep their secret).

Hanger is a tender and juicy cut of beef with a rich, full-flavoured taste. It also cooks quickly, making it perfect for weeknight meals. It can be marinated, pan seared, grilled or skewered and barbecued.

Tip: Trim off any remaining connective tissue and sinew with a sharp knife before cooking. Hanger is best cooked medium-rare to maximise tenderness. 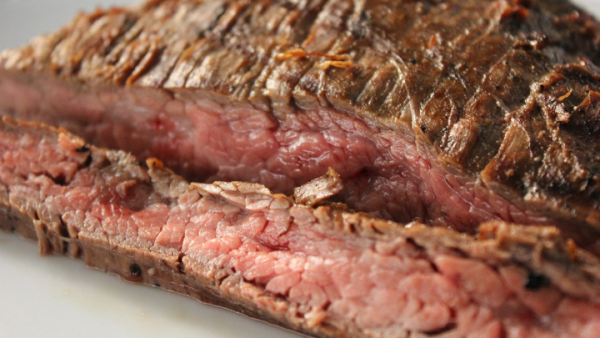 Flank steak is a cut taken from the underbelly, or the flank, of the cow. It is sometimes used interchangeably with skirt steak but they are different cuts (though the textures are similar).

Flank steak has a reputation for being tough in texture, partly due to its shape. It has a thick and a thin end, and not a lot of connective tissue and fat, making it easy to overcook. But flank steak can be incredibly tasty with a rich, beefy flavour if prepared properly.

Flank is a cut that takes to marinades really well, which helps break down proteins and tenderises the meat from the outside. It is best suited to quick cooking methods like grilling and searing, and is great in stir fries, fajitas or as a centre-of-the-plate protein.

Tip: Don’t over marinate your flank steak, especially with a marinade that contains a lot of acidity. Up to 1 hour is best.

Skirt Steak (aka Inside Skirt, Outside Skirt or Entrana Steak in Spanish)

Skirt steak is an extremely flavourful cut of beef that takes well to marinades and rubs. It is also a popular cut to use in tacos, stir fries and fajitas.

With its thin, flat and wide shape, skirt steak works best grilled quickly over high heat and then left to rest. To minimise the toughness of this inexpensive steak, marinate it first for up to an hour.

Tip: Skirt steaks are thin so don’t overseason them. If marinating a whole skirt steak, score the fat side first.

Often mistaken for flank steak, the flat iron steak comes from the shoulder of the cow, cut off the blade. Named after its resemblance to an old-fashioned metal flat iron, flat iron steak is another lean and tender steak option that butcher’s like to keep for themselves.

There is a line of gristle, or sinew, that runs down the centre of a flat iron so the steak can be tough if this has not been removed by the butcher.

With its uniform thickness, flat iron steak is incredibly versatile – you can sear it, smoke it, grill it, marinate it, use it with a dry rub, slice it up for sandwiches or enjoy it on its own.

Tip: Marinate the whole flat iron steak first to tenderise it, before seasoning and grilling. 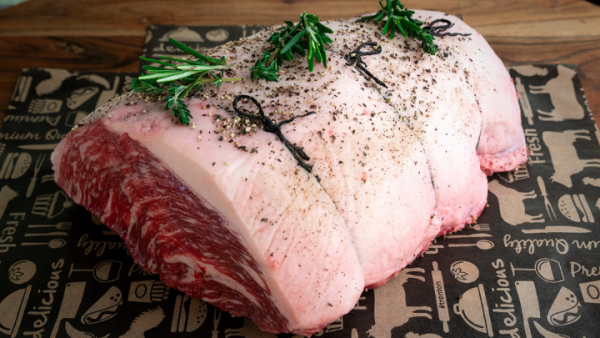 Hugely popular in Brazil, the rump cap or picanha is one of the most flavourful cuts you can find. It is a flat, triangular, boneless cut taken from the cap of the top sirloin. Rump cap has a distinctive thick cap of fat running across the top, which adds a great depth of flavour when cooked.

Rump cap can be roasted whole, sliced into steaks and grilled or cooked Brazilian style in a barbecue rotisserie known as churrasco.

Tip: When cutting a whole rump cap into steaks, always cut with the grain. Once the steaks are cooked and rested, the final cut will be sliced against the grain for maximum tenderness.

Read next: What is picanha and how do you cook it? 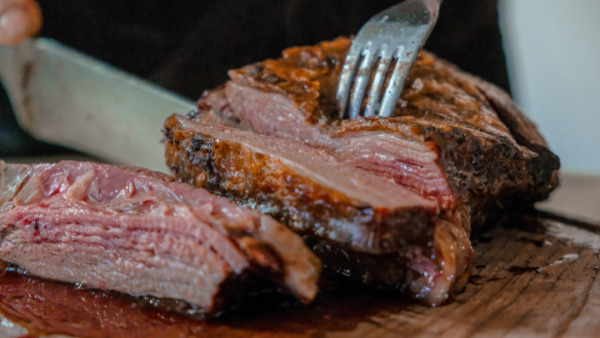 Brisket is basically the beef equivalent of a pork belly. Thanks to the popularity of Texas-style barbecue, it has grown in popularity over the years. Brisket is generally separated into two cuts – the point end brisket and the navel end brisket (although some would argue that the beef navel isn’t really brisket). For the sake of cooking them, we’d say they both make the cut as brisket.

When it comes to cooking with brisket, going low and slow is the most popular method, as it gives the beef time to properly break down and develop its flavour. This is the way to go if you want pulled beef brisket to eat with tacos, on bread rolls or even with pasta. You can smoke it like many keen barbecuers do, or you can make pastrami, cure it, make corned beef or even homemade beef bacon. If you don’t have a smoker, you can also cook brisket in the oven.

If you’re keen to give it a shot, talk to your butcher about your preferred cooking method so they can pick you the perfect piece.

Tip: When buying the whole brisket, ask the butcher to trim any excess fat and prepare it for smoking. A good butcher will know how to do this. 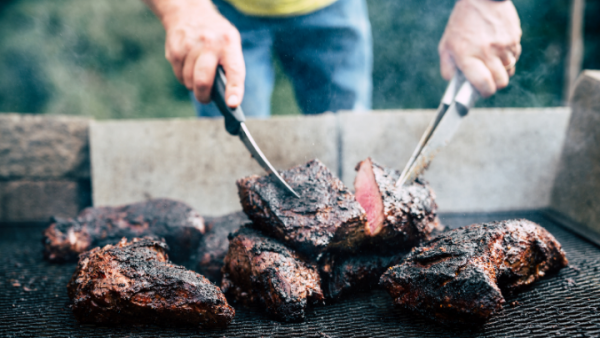 This triangular-shaped cut comes from the bottom of the sirloin. It is often referred to as a “Poor Man’s Brisket” as it grills fast like a steak, but cuts like a brisket, making it a faster and cheaper alternative.

Tri tip is versatile and takes well to both wet and dry rubs, but should be seasoned aggressively due to its thickness. It has a desirable flavour profile and makes a great roast, and can also be portioned into steaks for a quick and easy cook-up on the grill.

Tip: Tri tip has two distinct grain patterns: one vertical and one horizontal. For best results, cut the steak in half where the two grains intersect, then slice each piece against the grain for maximum tenderness.

Read next: What is tri tip and how to cook it

Taken from the chuck section, the teres major is seldom used because it takes more skill to extract, so it often winds up as ground beef or stew meat. However, it is an exceptionally tender cut with some comparing the taste to a fillet mignon – with the added bonus of being half the price.

Shaped like a pork tenderloin, teres major can be roasted, pan fried, smoked like a tri tip or grilled until medium rare and sliced into medallions. There isn’t a lot of fat, so it takes well to being wrapped in bacon first to enhance the flavour.

Tip: If smoking, leave the lid open so you don’t overcook it while forming a crust.

Unlike more commonly used cuts, the name Delmonico doesn’t reference the cut’s position on the cow, making it a tricky cut to identify. The Delmonico is a great steak that is found between the end of the rib eye roast and the beginning of the chuck roast. It’s basically a transition to the rib eye, and a much cheaper alternative.

The Delmonico has variants in its muscle groups, making it full of flavour and a perfect cut to sous vide. It can also be grilled or pan fried to a nice medium rare.

Next time you’re thinking of firing up the barbecue to entertain guests or are simply looking for a protein to feed the family that won’t break the bank, why not try something new and experiment with one of these lesser known cuts of beef.

It’s worth giving your local butcher a call to ensure they have these cuts in stock before you commit to that new recipe.

This article was originally posted in August 2018 and was updated in January 2021 and August 2021.

How to reverse sear the perfect medium-rare steak

Is it a cardinal sin to freeze steak?

What are the best cuts of steak in the supermarket?