We all know beef short ribs are a low-and-slow barbecue lovers dream. But cook them like the Koreans do and you’ll have a flavourful short rib dish that cooks fast, without losing any of that delicious, meaty flavour.

LA galbi is a Korean-style barbecue short ribs dish marinated in a perfectly balanced sweet and savoury sauce. Galbi, or kalbi as it is sometimes written, literally means “rib” in Korean. What makes LA galbi stand out from other short rib dishes is its distinctive horizontal cut, sliced thinly for a quick grill.

We spoke with Daero Lee, head chef and co-owner of SOUL Dining in Sydney’s Surry Hills, about the origin of the dish and what makes it so special.

“First of all, the produce has to be just right,” says Daero. “The quality of the meat is essential for making good galbi. Then, it’s all about the cut and the balance of the sauce”.

The cut, also known as “flanken” or “asado”, is where the ribs are cut lengthwise across the bone into thin strips. This is a delicate butterfly cut that requires a sharp knife and a bit of patience. “The whole plate rib is cut into long slices, with the bones still in,” Daero explains.

You can probably find it at an Asian grocery store, but if you have a good butcher you can most likely ask them to cut it for you.

While the dish is called LA galbi, it actually has nothing to do with the city. “Most people mistakenly believe that the recipe comes from Los Angeles, but actually the name refers to the “lateral cut” of the meat, as it is cut in a way that shows the sides,” explains Daero.

The traditional galbi sauce is made with a combination of soy sauce, sugar, apple or pear, onion, garlic, ginger, rice wine and finished with sesame oil, but Daero says it is not limited to beef ribs. “The sauce can actually go with any kind of meat – pork ribs, chicken, or even with tuna or salmon steak.”

When marinating the beef, a good tip from Daero is to put the meat and marinade in ziploc bags – this creates more space in the fridge and mixes well without any mess. 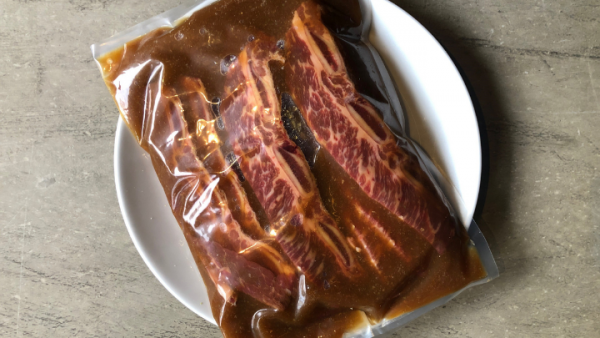 According to Daero, galbi is traditionally served with rice, banchan (a selection of side dishes such as kimchi) and various kinds of lettuce to make ssam, or lettuce wraps. But he says the cooking methods can be versatile. “If you don’t want to use the barbecue, it easily works in the oven or pan as well, which is more of a braised style.”

Check out Daero’s recipe for LA galbi below and bring your favourite Korean restaurant right to your own home.

Lightly season the meat with a mixture of brown sugar, salt and cracked black pepper.

Prepare your marinade by blending the marinade ingredients, except for the sesame oil, together. Once blended (either with a home blender or mixer), add the sesame oil to the blend and mix well.

Marinate the meat in the sauce. Either in a deep dish or put the meat and marinade into ziploc bags. The meat should be well covered in the sauce from all sides. For best results, marinate overnight in the fridge or for a minimum of 6 hours.

Cook the beef on a barbecue until both sides of the meat are cooked through. Serve and enjoy!

How long does ground beef last in the fridge?

Working with knives: 7 things you need to know

Video: How to reverse sear a steak on the barbecue

How to smoke a brisket: Tips from a barbecue grand champion