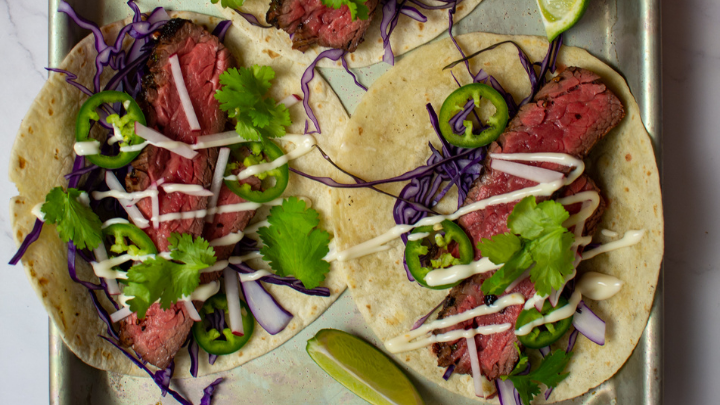 This recipe for carne asada tacos is from Gavin Sutherland, Brisbane-based recipe developer and the man behind Another Food Blogger.

Gavin first fell in love with Mexican food when he lived in New York City.

“Places like Empellon, Tacombi, Salvation Taco and now Alta Calidad (owned and run by a great friend of mine in Brooklyn) are churning out quality, fresh and tasty Mexican food. It’s no wonder I fell in love with the humble taco!”

The Latin American term carne asada literally means “grilled beef” and is a dish composed of thin steaks marinated in lime juices, spices and garlic, then grilled over high heat. Carne asada is usually served in tacos, burritos, quesadillas, with a salad – or just served on its own with rice and beans.

His recipe takes one of the lesser known cuts of meat, the hanger steak, and transforms it into a street taco party in your home, with a delicious marinade and lemon mayonnaise.

“These steak tacos, done carne asada style, are so damn good you’ll want them on the regular,” says Gavin.

If you can’t find a hanger steak (there’s only one per animal and some butchers like to keep it for themselves) any other thin steak such as flank, skirt or sirloin will do.

For the steak marinade:

For the lemon mayonnaise:

Combine all of the steak ingredients together to marinate for up to 4 hours.

Combine the lemon mayonnaise ingredients together. Taste and adjust, adding more lemon or mayonnaise if needed.

Grill the hanger steak on a hot barbecue for approx 5-6 minutes on each side. For medium rare, you’re looking for an internal temperature of 58º–60ºC.

Remove the steak from the heat and let it rest for 5–10 minutes before slicing.

While the steak rests, warm your tortillas in a frying pan for about 15–20 seconds per side.

To serve, cut the steak into 2cm slices. Spread a bit of mayo on the tortilla and top with cabbage. Place the rested steak on top of the cabbage, then top with radish, jalapeno and then finish with a drizzle of lemon mayo. Serve with lime on the side and allow your guests to squeeze. Enjoy!