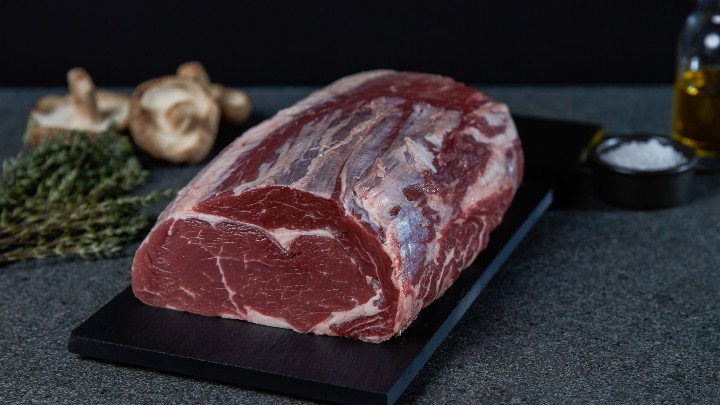 What cut of beef is a cube roll?

A favourite with butchers and meat lovers alike, the cube roll is one of the most tender and flavourful primal cuts there is – even if you might not know it by that name.

One of the most highly prized and sought-after primal cuts on the beef carcass, the cube roll is renowned for its ideal combination of melt-in-your-mouth tenderness and bold, intense flavour.

And whether you know it or not, there’s a good chance you’re already a cube roll fan.

A roll by any other name

If you’ve just been smiling and nodding politely while we’ve been going on about ‘cube roll’, it’s probably because you know this primal cut as a ribeye, rib fillet or Scotch fillet.

It originates from the rib section of the animal – specifically, the section running along the backbone, spanning from the fourth to 13th rib between the chuck and the striploin. These are only lightly worked muscles, with plenty of intramuscular fat interspersed within the muscle fibers (marbling), which is what makes the cube roll so tender and succulent. The name is derived from the cube of fat in the core of the meat that separates different muscle groups.

While the cube roll isn’t quite as tender as the tenderloin, the delicious trade-off is that it packs more flavour and needs no sauce to be appetising – and it’s this balance of tenderness and flavour that makes it a favourite with butchers and diners in the know.

Know your roll: How to use a cube roll

Buying a cube roll in its primal form is both efficient and economical. If you go to a quality butcher, you can ask them to have it prepared and portioned as per your request; and have any left-over meat minced, diced and trimmed so you’re not paying for wastage.

You can roast your roll whole in the oven – if you leave the bone in, that’s a standing rib roast, also known as prime rib. Roasting the beef on the bone ensures you’re getting the most flavour out of this famously delicious cut, which is why the standing rib roast is widely considered the crème de la crème of roasts and reserved for special occasions.

If you take a standing rib roast and slice it into steaks, you’ve got yourself a tender and flavourful rib cutlet, also known as ribeye, a bone-in rib steak perfect for cooking in a pan or on the barbecue. (If you’re talking to someone from outside Australia or New Zealand, they’ll call this a rib steak – and just to be difficult, most other countries use ‘ribeye’ to refer to a boneless rib steak.)

A large cut from the cube roll with most of the rib bone – about 30cm worth – left intact is a tomahawk steak, named after the Native American throwing axe it resembles. The extra-long bone looks impressive, and functionally it serves to insulate the meat while it cooks and preserve its moisture and tenderness, in much the same way as a ribeye. Because of the extra bone weight, expect to pay more for a tomahawk steak – which is why it is usually reserved for those special occasions or showing off to friends and family.

If you remove the bone from the cube roll, you’ve got a Scotch fillet, which can also be roasted whole or sliced into steaks. Like the ribeye, Scotch fillet is tender and tasty, and is best suited to hot and fast cooking methods like pan-frying and barbecuing. It can also be thinly sliced into strips to use in a stir-fry.

Again, be careful of the terminology here if you are not from Australia and New Zealand, a Scotch fillet is a boneless rib steak, but in the rest of the world, they just call that a ribeye.

Lastly, if you remove the bone from the cube roll and you roll it into a cylindrical shape and tie it with butcher’s twine to ensure it holds its shape before you throw it in a hot oven, then you have yourself a rolled rib roast.

Want a mouth-watering and uncomplicated dish that stars the cube roll? Try this recipe for a cube roll roast with roasted pumpkin and salse verde.

Fancy Frenching a rib bone and trying a tomahawk? Take these recipes for tomahawk baked in clay, tomahawk steak with chimichurri and roasted peppers, and tomahawk steak in a coffee peppercorn crust for a spin.

Can’t decide if you want to leave the bone in and enjoy a ribeye or tomahawk, or take it out and go the Scotch fillet route? Check out this guide to what cooking on the bone really does to your steak.

What’s the difference between jerky and biltong?

Beef brisket 5 ways: Our favourite recipes to try at home

Why you should always rest your steak after cooking

The best way to defrost steak